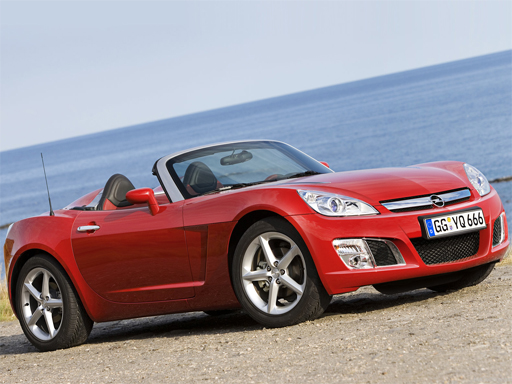 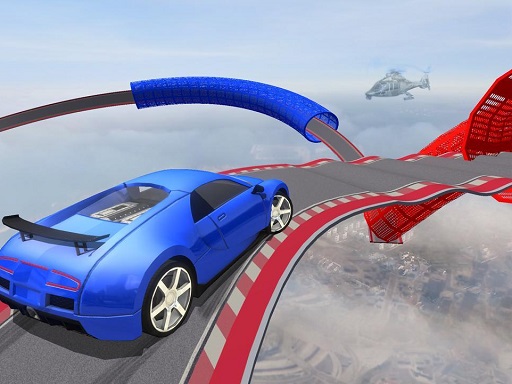 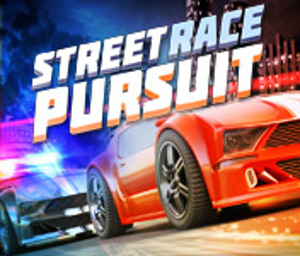 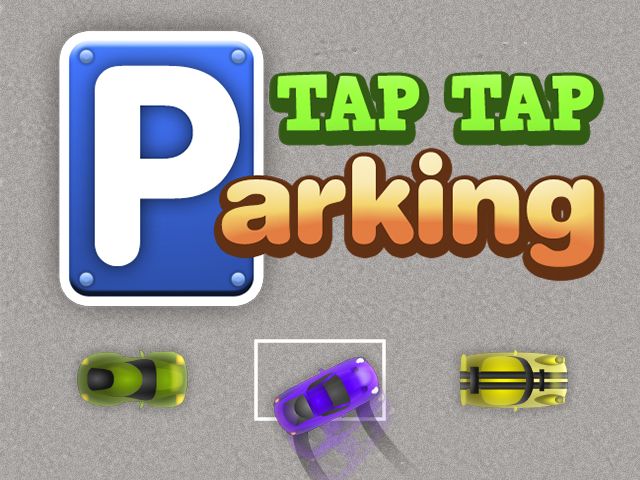 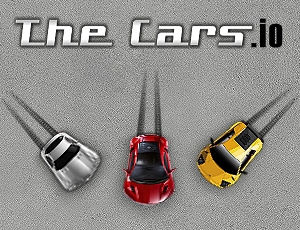 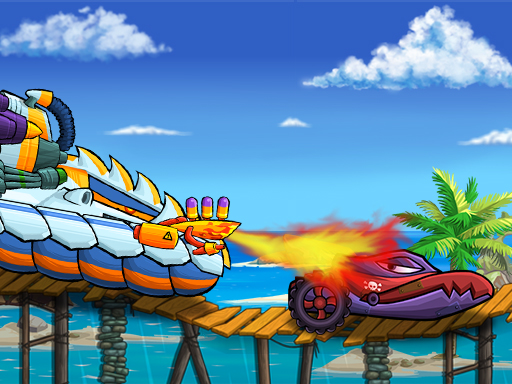 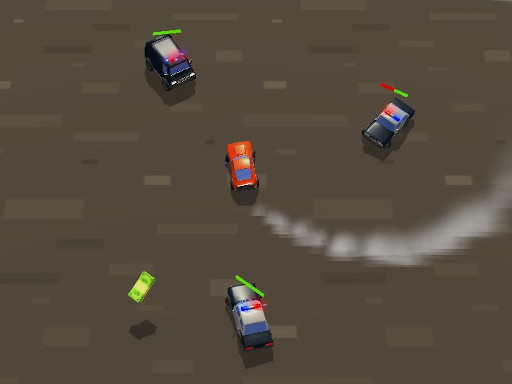 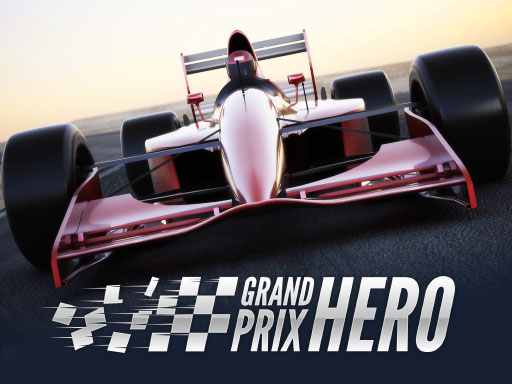 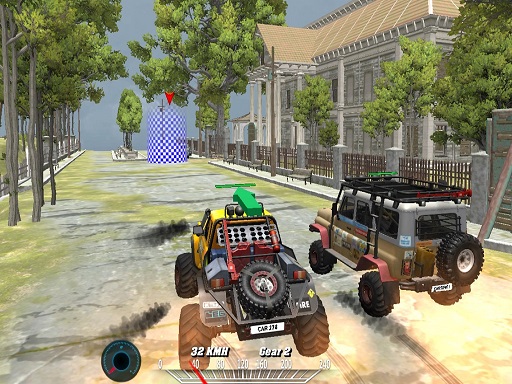 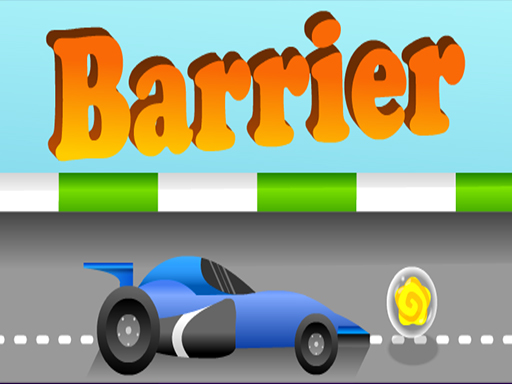 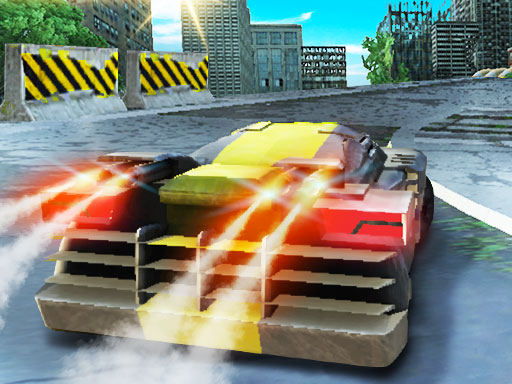 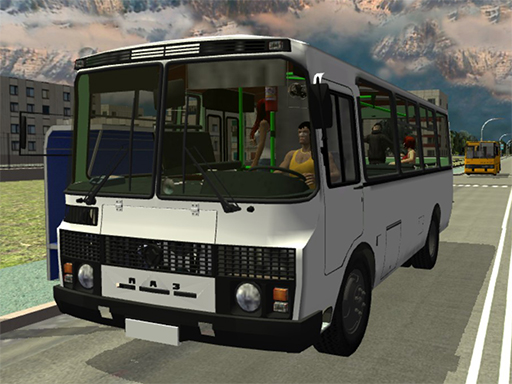 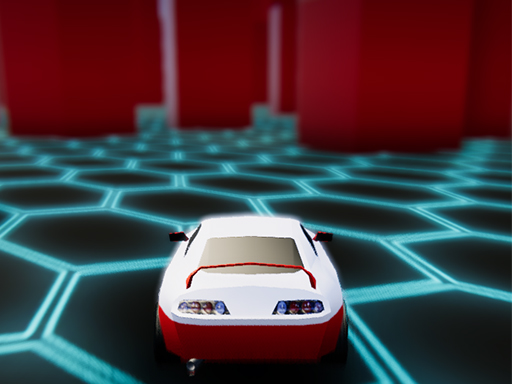 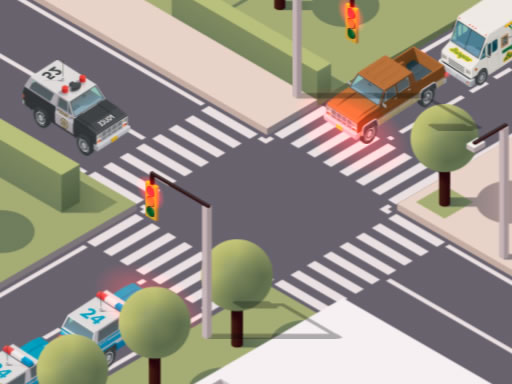 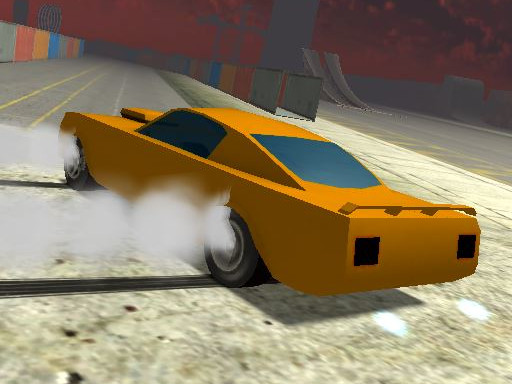 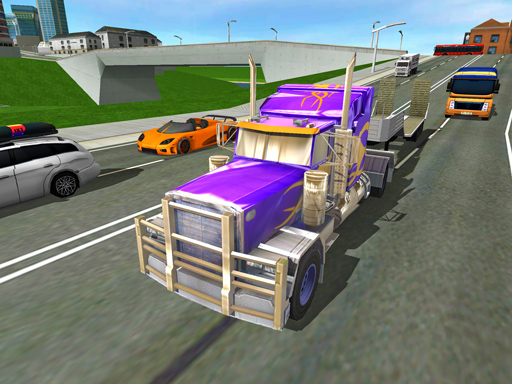 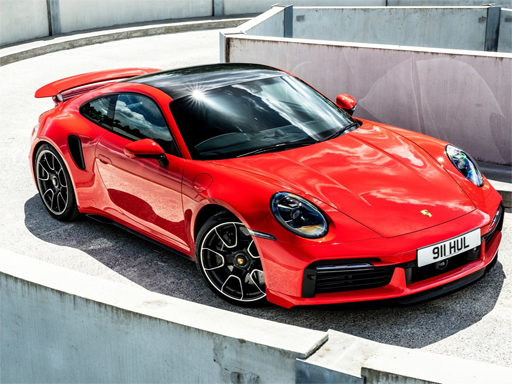 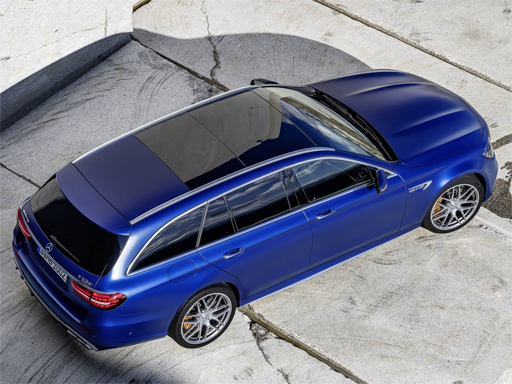 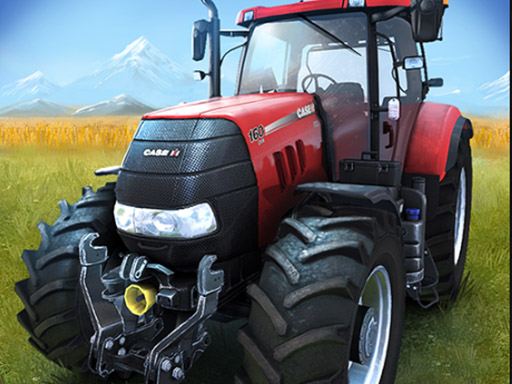 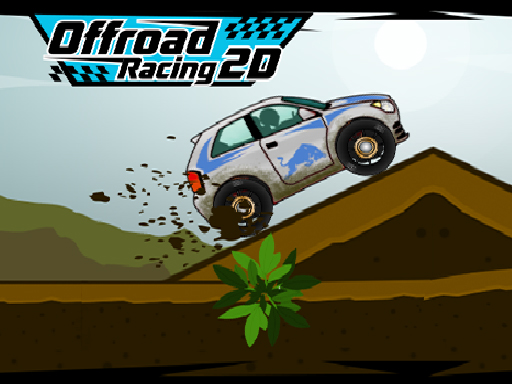 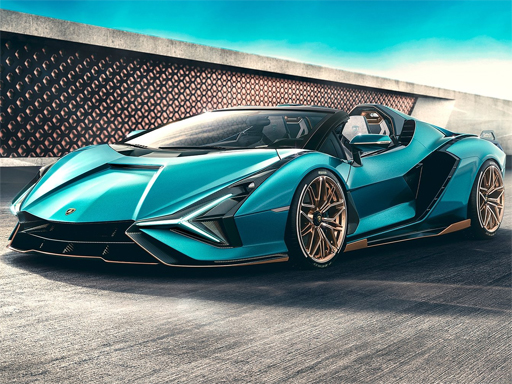 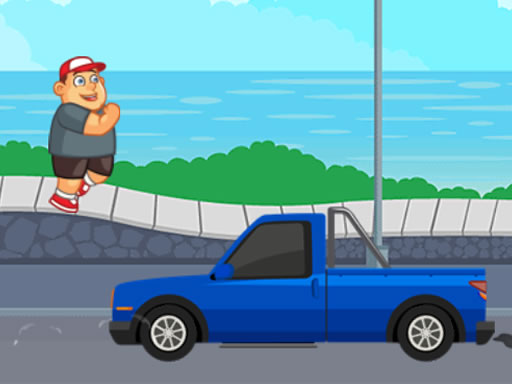 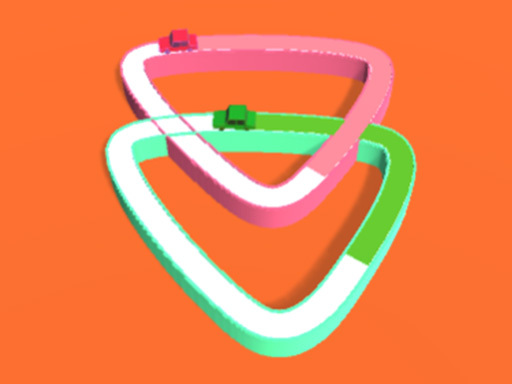 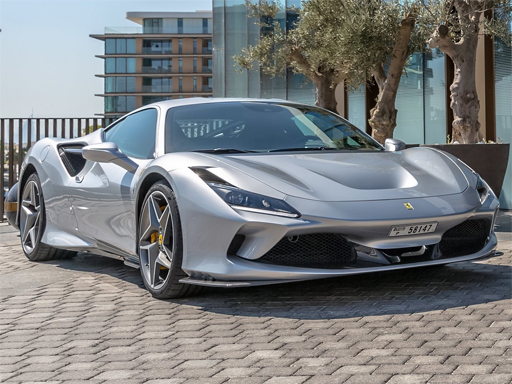 Car games are all about adrenaline pumping action where you get behind the wheel and put your skills, reflexes and guts to the test. A car game does not need to have fancy graphics to be exiting, it is all about the adrenaline-pumping action.

Something that is proven by games like Night Driver, Pole Position and Out Run that kicked off the genre in the 70’s and 80’s.

The thrill comes mainly from the gameplay, when you are driving at 200 miles per hour you do not have the time to stop and admire the beautiful scenery.

That said, good graphics and sound never hurts as you can see in many of the games at our site.

You do not need the worlds most expensive car either. You can drive whatever you like, it can be a street car, pick-up truck, police car or even a drawn cartoon, anything you want as long as it has a v8 under the hood.

So if you like crazy action buckle up and show that you have what it takes to be the first to cross the finish line in a car racing game or try a car parking game if you like to take things slower and test your precision skills.

Car games for all tastes

Nowdays there are car games for everyone and liked by all ages, including adults, kids, boy, and girls.

Now, it completely depends on which type of game you choose to play, we here briefly describe the genre with examples, categories, and types.

Arcade Car Racing video games put fun and fast-paced gameplay experience together, in which the player needs to complete his objective in different ways.

The primary feature of Arcade racing games that differentiate them from other simulation racing games is their liberal physics. In racing games, the player is capable of reducing his speed to take turns, Arcade games encourage the powerslide to enable the player to maintain his speed while drifting during the turn.

Track obstacles, collide with other drivers, or other traffic vehicles are more exaggerated compared to simulation racers as well.

Racing Simulators try to convincingly replicate an automobile’s handling. They come with racing leagues as well as fantasy cars.

The behavior of the car serves as the key factor in most of the racing experience.

Drag Race is a type of car racing video game in which two players compete against each other or the computer using the automobiles with an objective to be the first to cross the finish line.

The race revolves around the straight and short course from a standing start over a measured distance.

Before starting the race, each driver has an option to do a burnout, which heats the tiers and lay rubber downs at the starting of the track.

It is really important to take note of the rpm and when to shift gears.

Off-road Racing is a type of racing games which deals with modified vehicles, including motorcycle, trucks, cars, and buggies racing in off-road landscapes.

These games may be played from either a first-person viewpoint or a third-person perspective.

In Car Combat Games (or vehicular combat games) the main objective of the gameplay includes cars that are equipped with weapons such as missiles, mines, machine guns, rocket launchers, flamethrower, chainsaws, and more.

Players using these cars are trying to destroy each other to win. In these types of games you usually can choose different cars, each has its unique weaknesses, strength, and special abilities.

Often the player is capable of unlocking secret vehicles by completing certain tasks.

Mad Max released in 2015 by Avalanche Studios is a good example of a Vehicular Combat game.

In the begining Kart games was developed due to the fact that computers was not that fast and it felt more like driving a go-kart and still Kart Racing subgenre is famous for adopting simplified driving mechanics while including significant track designs, obstacles, and action components.

These games offer more arcade-style experience compared to other racing video games and typically provides the player with exciting modes, in which the players can release projectiles at each other or gather power-ups to boost speed or activate different weapons.

These types of games are more like crush, kill and destroy.

Car parking is a type of car game that takes place in either a 2D or 3D environment and deals with realistic physics and vehicular simulation.

In these games, the player as the driver must select his car before getting into the game world where he has to park his car at the specific spot while avoiding hurdles, obstacles and other types of difficulties.

In some games, the player needs to collect coins to score points while some games reward the player with points, depending on his performance.

The player has to start the game from the beginning once he touches the hurdle or any obstacle. Read more about car parking games

Taking inspirations from the success from games like Agar.io, car games have also embraced the .io genre with extremely simple mechanics coupled with fast and fun multiplayer action.

These games have all in common that they can be played directly in your browser online.

Car games in every dimension

In car games that take place in a 3D environment the player usually explores a fantastic landscape from either a first-person perspective or a third-person view to race against rival drivers.

In car games that take place in a 2D environment the player usually explore the environment from a side-scroll or vertical scroll perspective to reach the end of each track and win.

Many of the games which were released in the 70s, 80, and 90s are known as 2D games because the games have less detail environment, car, and tracks compared to 3D games.

2.5D (also known as Bird’s eye or Isometric Perspective) is a type of games which is reality 2D but different techniques are used to cause the scenes or images to simulate the appearance of being 3D.

In simple words, the gameplay of a 3D car game but restricted to a 2D plane or has a fixed camera angle.

Car games through the ages

One of the first car games to be released was Segas Grand Prix car racing arcade game. Like any real car it had a wheel, dashboard and accelerator.

On the monitor the road was scrolling forward and the player needed to drive as fast as possible while trying to stay on the road.

The era of the arcades! In the 70s many racing games was in the beginning focused around space, probably since it was easyer to code, like Ataris arcade game and Taitos space-themed racing game, Astro Race. But later in the 70s some nice car racing games came like Kee games – Formula K and Twin Racer. Also Ataris Le mans

The era of the C64 and Nintendo. A lot of the arcade games of the 70s was in the 80s ported to home computers like vic 20, Commodore 64 (C64) and console games like the Nintendo Entertainment System (NES).

Also some car games with new functionality came along like the Top-down (overhead) Driving video game named Rally-X from Namco that was released in 1980 and it was the first title to introduce background music and enabled scrolling in several directions, both horizontal and vertical, and in the game the player was capable of pulling the screen quickly in either direction. The game also introduced a radar, to show the location of the rally car on the map.

Formula One Grand Prix was released by Crammond in 1992 and quickly became the new champion of Simulation Racing, until the release of Indy Car Racing of Papyrus the following year.

The title boasted that it was unparalleled at the time with full recreation of cars, circuits, and drivers of the 1991 F1 World Championship.

In 1998 Colin McRae Rally was released and took the car racing genre by storm. The game presented car racing in 3D with top of the line graphics and gameplay. In 1997 the first version in the Grand Theft Auto (GTA) series was released.

It was the first car game with a completely open environment racing video game. The game enabled the player to control the vehicle anywhere around the streets of New York and London city.

It uses different checkpoints as pathways in the races, providing the player with the choice to take different shortcuts to checkpoints of the course, instead of using enclosed tracks for races.

The sequel of this game served as the first title to introduce both playable motorcycles and cars.

These games come with advanced graphics, stunning mechanic, and touch controls. The player usually competes against rival drivers controlled by AI in Single-player mode or other players in Multiplayer with an objective to cross the finish line before anyone to win the race.

Lots of boosters, upgrades, and power-ups will be discovered and needed to complete the objectives.

Players are capable of choosing their driver, car as well as a track to start the action with a task to complete the race before anyone.

Some games feature customization options, enabling players to modify their car by upgrading engine, suspension, tier, and doing the paint job to improve the performance.

The cars are usually split into categories due to their performance and some of the classes are often locked.

Nowadays, players can play exciting racing games directly in their browsers for free, no need for download and installation.

These games often start with the player selecting his vehicle from the different types that are available, selecting the course and starting to compete against the rival with his selected car.

The aim of the player is usually to reach the end of each race while eliminating the rivals. As the game proceeds, it becomes harder and further vehicles and content will be unlocked.

Modern racing games come with Online Multiplayer mode, enabling players to go against each other in a variety of locations from all over the world with an opportunity to show off their driving skills while driving their favorite car.

We want you to be able to play all games on our site and that is why they are all html5 or WebGL.

Both HTML5 and WebGL have JavaScript APIs, so they are similar regarding integration. HTML5 car games are much easier to code and play, they are often simple, have limited features and set in a 2D environment. WebGL car racing video games are on the other hand highly advanced, complex, usually set in a 3D environment and need high developing skills.

Both types of games are available to play online and work with almost all types of browsers. At Games Online we choose not to support flash since the games no longer work out of the box and need some tinkering.

Car Games are well-known for racing purposes. This game genre includes an extensive collection of cars and a fabulous storyline.